Seattle born, Joh Chase, is a singer-songwriter and multi-instrumentalist.  Having toured several times nationally and regionally (Pretty Kind of Off White Tour 2006, TMJ Tour 2008, I Heart People Tour 2011), Joh Chase is a seasoned veteran to the indie and grass roots music scene on the West Coast.  Opening for Noah Gundersen, Aaron Sprinkle, Barcelona, David Bazan, Robert DeLong and Allen Stone to name a few, Joh's earlier folk/rock song writing came from their Northwest roots.  Their career beginnings have led them to play in notable venues across the country with other up and coming artists as well as collaborating with Huit Kilos (Ricardo Lemvo), Joey Ryan (Milk Carton Kids), Robert DeLong (Glassnote Records), and Z the Band (Nas).  Their latest studio record "#<3" was produced by Roger Greenawalt (Ben Kweller, Rhett Miller, Nelly McKay, Rufus Wainwright, Afro-Jersey) in Williamsburg Brooklyn.​   ﻿
Joh has independently funded five full length records since 2002 as well as, The I Heart People Tour (2011), their travels to SXSW (2012) and their 6th studio record "#<3" (2013) through support of Joh’s fans and collaborators through online outlets, such as kickstarter.com.  The Los Angeles Times spotlighted Joh in their review of The Laramie Project: 10 Years Later for her live scoring and Broadwayworld.com likened Chase’s voice to Judy Collins.  Audience members, Jane Lynch, SIA and Lily Tomlin all applauded Joh's instrumental role in the Laramie Project. In the fall of 2015 they underscored the SOLD OUT and Triple Extended Ike Holter play, "Hit The Wall", at the L.A. Gay and Lesbian Center, playing original songs written by Anna Woronker and Charlotte Chaffey.  After releasing their second self-produced record in 2016, "SOLO.B" they took it on the road to the SouthWest, SXSW 2017 and the West Coast.
Joh completed a successful kickstarter campaign in the spring of 2019 and is in the studio with Dan Molad of Lucius working on a full length studio record to be released in the summer of 2020.  They released an E.P. “To Tape” in the end of November 2019 and Joh is also working to release a covers project in the spring of 2020, before the full length record is released. 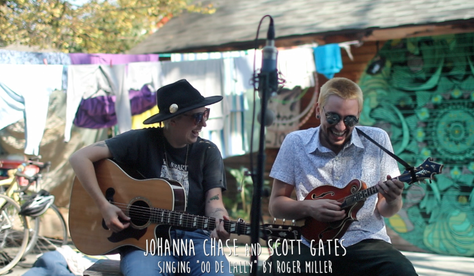